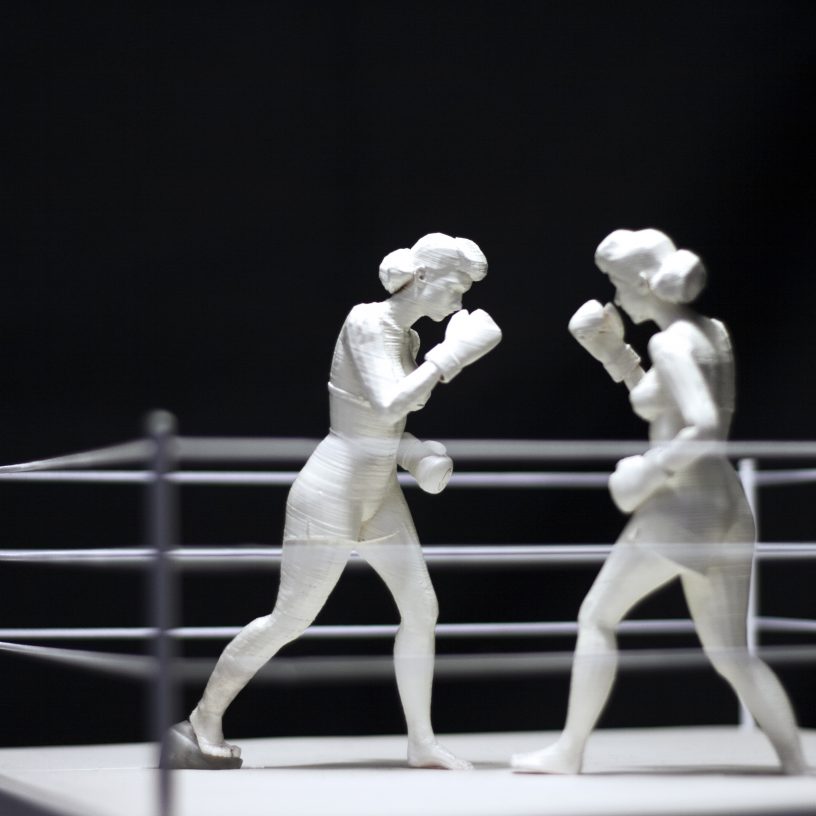 One of the approaches in programing artificial intelligence (AI) is development of the evolutionary algorithm, where computer writes code that can do something, and during this process rejects the pointless lines. AI programs are tested on various computer games. Often enough, it happens that AI plays completely radical strategy, finding out the simplest solution that humans have overlooked. And for me, that’s the most interesting thing with AIs. After thousands of years of common interaction between humans, solutions are developed by AIs that can completely change our perspective. How will AI in the future influence, maybe, human relations? Sculpture, Silky Algorithm, inspired by this concept, transposes computer games in real spaces, but connects them with unexpected actors and setups.

“For example, when playing Kung Fu Master, the evolutionary algorithm discovered that the most valuable attack was a crouch-punch. Crouching is safer because it dodges half the bullets aimed at the player and also attacks anything nearby. The algorithm’s strategy was to repeatedly use this maneuver with no other actions. In hindsight, using the crouch-punch exclusively makes sense.

That surprised the human players involved in the study. “Employing this strategy by hand achieved a better score than playing the game normally, and the author now uses crouching punches exclusively when attacking in this game,” say Wilson and co.

Overall, this is interesting work that should suggest to computer scientists who are focusing exclusively on deep learning that they may be missing a trick. The evolutionary approach is a powerful alternative that can be applied in a wide set of situations.” –
https://www.technologyreview.com/s/611568/evolutionary-algorithm-outperforms-deep-learning-machines-at-video-games/